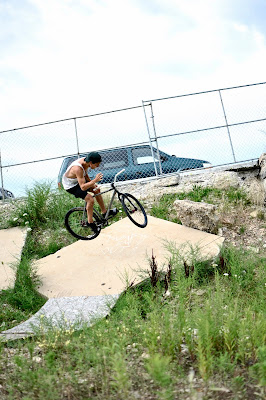 Antonyo was one of the main organizers of what is still considered one of the largest and most insane freestyle fixed comps to date. At Midwest Mayhem I talked to him after thinking that his riding was insane, and I knew that he would be someone to stay in touch with. At the RVA Jam in Virginia, Antonyo shredded the soggy place apart; and after coming out with his sick WRAHW exclusive weby, he slowly creeped into the industry. Besides all that ramble jammable Antonyo is just a sick dude. He is super humble and supportive, and after staying at my house for a week, I decided that he is one of nicest dudes that i have ever met. Easily.
Hey Antonyo. Introduce yourself. Whats your full name, age, hometown/current residents, and how long have you been ripping?
My name's Antonyo Wothe, I'm 22, and Milwaukee is my home. I've been riding fixed freestyle for about a year now.

How did you get yourself into this fixed gear mess?
I started out riding BMX for about 5 years. Hopped on a garage sale road bike when I needed to get around more which ended up getting wrecked in a car accident. I got a Trek T1 right after which is also around the same time I started seeing things for Bootleg Sessions. Eventually threw on a 26 mtb wheel and I've been riding since.

You choose to ride more technical as a pose to throwing yourself down stairs like some losers. How did you come across this decision with your riding?
Hahaha, it's just way more fun for me. Big stairs and gaps are way cool, I just like to stay closer to the ground and see how creative I can get at a spot. Milwaukee's bmx scene is pretty tech so that's probably where that comes from.

I feel that there is still little focus on individuality and personal style amongst most riders in the sport. Do you think that this is a hindrance to the growth of fixed gear freestyle?
Nah, I don't think it's too big of a deal. The sports still way young and most people, myself included, are still trying to figure out the basics. There are definitely people that have their own style now but I feel like after a couple of years people are really going to be standing out from each other, it's gonna be awesome!

You have been killing the tire slides lately, and actually is the first person to do a legitimate one. The first time i saw you do one was at Chinatown Skatepark here in NYC. Are these really difficult for yo still or are you retie cozy with them? Would you throw one down a ledge ?
Ha at first it was just like a style thing to air and throw down my back end. I never actually thought I'd get a fixed freestyle bike to tireslide until that hip at the Chinatown park. It just ended up working out there so I took it to some other things and it's been going pretty well. I've been progressing on the length little by little. I'm actually on the hunt for a down ledge, if I can't find one by winter there's a few skatepark ledges that would be cool but really would like to find a street hubba.
Generally, what do you do in Milwaukee when you are not riding?
Most of the time I'll be hanging out with my girlfriend Katie. It's sometimes real hard to get motivated to ride when I have a sweet girl constantly feeding me delicious food, ha. Call of Duty is always good and I love food. I also spend a lot of time watching dumb videos on youtube. Oh yeah geocaching is great too! So Katie, COD, eating, youtube and geocaching.

While you were here in New York, you and I both found out that we had an addiction in common, half gallons of Tropicana Orange Juice. How much do you drink on a weekly basis?
Mann, OJ is soo good AHHH! I would seriously go through 1 maybe 2 a day during the winter, it's so fucking refreshing! But than I got out of that and hooked on Sprecher rootbeer for a few months and now I'm back revisiting a phase of Arizona Peach Tea. I'll have about 2-3 cans of peach tea daily. If you haven't tried it, do yourself a favor. 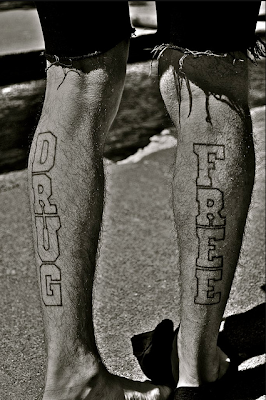 While on the topic of addictions, obviously you are straight edge due to your massive tats, but what got you into all of that? What made you decide to claim edge as apposed to just staying clean without any claiming?
Starting high school, I made a lot of really poor decisions. I started to turn things around and apart of that was starting to ride BMX. When I first started riding, a majority of the BMX scene here was edge. It was great to be around these guys that were living a really solid lifestyle riding little kids bikes and having good clean fun. I claim edge because it is good for me. I could've just stayed sober and that wouldve been that but there's always turning back to what you were doing no problem. Claiming edge is a serious lifelong commitment to me and there's no chance of me breaking it.

How often do you get asked questions about your ripped ear lobe?
Haha at least once a day. For some reason I've stuck to the "my dog ate it" story but I've been getting creative lately. Recently I convinced a kid that my 1 of 3 in the world fire breathing dog burned it off and I was forced to bury it alive. 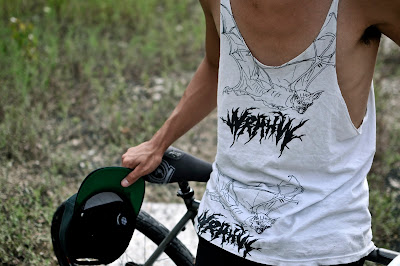 I snagged a few clips of you for the up and coming WRAHW video, but are you filming for any other video parts?
Nah, just random clips here and there for milwaukee web edits. Saving some stuff for you to come and film though, stoked!

There is word about you and the Milwaukee dudes being on Fuse TV. Whats up with all that?
Rick Kris and I headed down to chicago a few weeks ago to ride coincidentally the same weekend that Fuse TV was filming the chicago freestyle dudes. We filmed and the contact guy at Fuse said the segment was going to air but it never did. Hopefully we'll be able to get a hold of the footage. Kind of a bummer but FGFS will have it's day soon, ha.

Commotion has already started forming around the idea of the next Midwest Mayhem. Where you expecting for things to go was well as they did? Are there any guts that you can spill for us, in reference to the next MWM?
Midwest Mayhem was wayyyy beyond what we thought it was going to be. Initially we were thinking maybe 20 people at most, from chi, mpls, det, and mke. It snowballed real quick into something really big unexpectedly and we somehow managed to pull it off with a few snags. From talking to people about it, next year's MWM is really being looked forward to which is great. As far as next year, we definitely want to make sure everybody gets to walk away with some kind of prize, and for a few that means a fatter wallet, HEYO!

You want to give some hollers out?
First and foremost, Drew Triplett and everybody at Milwaukee Bike Co and Bens Cycle. The sport would not be where it is today if it wasn't for those guys. All the dudes over at Burro! Russell at SunRingle! Pete and Kevin at Cog Magazine! Steven at Megabolt! The WRAHW fam, Grime fam, and Milwaukee crew!!!!!!! Also, COME TO THE ALL CITY CHAMPIONSHIPS!
Photos By Rick Anderson
.
Posted by WRAHW at 12:28 AM