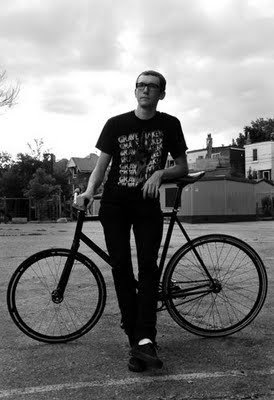 Can you introduce yourself a little bit; what’s your name, and where are you from?

My name is Tom Briggs.  I’m originally from Vancouver B.C. but have moved around quite a bit through out my life and currently live in Toronto, Ontario.

When was Skitch Clothing started, and how did the idea come about?

Skitch Clothing was originally conceived on my front porch in the summer of 2007. I remember sitting with my roommate Skylar talking about bikes and it just sort of came on a whim.  Vancouver’s bike scene was very inclusive at the time and I just felt like I had a bit of a family going there so I wanted to do something to represent the city and the riders that lived there.  The original scope and focus was strictly our hometown but it has now grown to be a bit more international.  I also enlisted the help of a childhood friend named Evans who still helps me out with Skitch.

There has been some slight controversy, out there, when it comes down to Skitch’s name, but what a lot of people don’t know is that you are indeed a courier yourself.  How did you come up with this name?

The name was something that I think came about very organically.  If anyone out there has ever been to Vancouver, it’s a very hilly city and most of the people I rode with would skitch up hills all the time.  With trying to keep the focus on Vancouver at the point it seemed totally appropriate. It just seemed like a logical fit for the brand name.  As well I am also a courier but that really did not factor into the creation of the name.

While we are on the topic, what else are you involved with outside of Skitch Clothing?

I have received a lot of questions concerning Skitch and the products, blah blah, but what people don’t know is that Skitch is more about a relaxed family than some money makin, shake and bake deal.  What are your thoughts on this?

I remember you mentioning kids slinging there sponsor me applications your way like three to five times a week (which you seemed super surprised about) at times.  How do you choose riders in which you feel are down to join the family?

Yeah it’s true.  There was about a two-month period where I received more sponsorship letters than I could have ever imagined.  It was unbelievably flattering but at the same time I felt extremely bad about having to tell so many kids that we were unable to sponsor them.  Everything comes out of my own pocket when it comes to sponsoring someone so for that reason we have to keep the team really small.  For the very few people who we do sponsor it comes down to creativity while also being very talented.  It’s also not just about creativity on your bike; it’s about the person themselves and how they are outside of riding.  With guys like yourself (Torey) and Wonka who I’ve never met in person, it was about building a repore with both of you before sponsorship ever came up.  I was aware of the work you guys had both been putting in and I was a fan way before having ever talked to either of you.  There is also an artistic flare to both of you that I think I was attracted to because it reminded me of me. 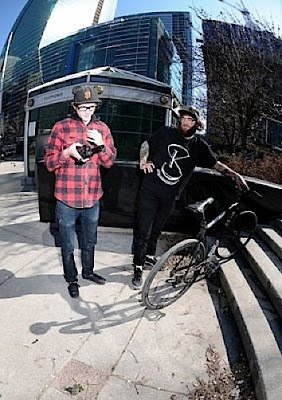 Who does the Skitch Clothing team consist of?

The Skitch Clothing family currently consists of riders Tom Mosher, Wonka, Ten Ten, Duncan Lewis, Torey Thornton as well as Ryan Narita who helps with the blog from time to time.  Ryan Lidstone distributes our products on the west coast.  Wayne Morhart is our filmer for the Revival and Evans Li is my right hand man with all things creative.  We have also worked with many photographers who are close to the project such as Ted Power, Tobias Romaniuk, Justin Morris and Courtney Mathieson.

Wonka is the newest member of the family.  What moved you to put him on, and did Mosher and my persistent hype for the kid influence this idea?

First off Wonka is one of the best riders we’ve ever seen on a fixed gear so it was a bit of a no brainer talent wise.  With everyone on the team though, there needed to be a relationship established.  Both yourself and Mosher are very good friends with him and it was both of you being so hyped on having him be a part of this little group that it just became an idea that fit.  He’s unbelievably creative with his riding as well as how he is as a person; I think that’s what is most important. It’s about creativity not just being able to do a 1440 Keo Spin in a parking lot. 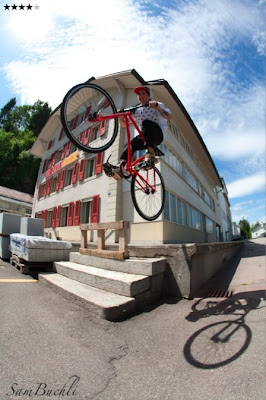 For those that don’t know, and who are still confused, what happened to the original Revival tour?

Without going too far into it, we had a few guys on the West coast who were unable to make it at the last second, Tom Mosher was tied up with a job and could not get out of work and NYC became a bit unsteady with dudes not knowing if they were going to be in town or not so we made the extremely hard decision to postpone the trip. I can now tell you though that we will be in NYC filming from August 22nd to September 1st.  Filming has also been going extremely well in Vancouver and Seattle with both cities producing some unbelievable footage.  I have to give a huge thanks to my great friend Wayne Morhart who is filming the video.

So, what are your plans for Skitch for this up and coming year?

As of right now our focus is strictly on getting The Revival video finished and out there for everyone to see. There are also plans for a new line of shirts as well as a couple collaborations with some other big names in the fixed gear scene that I’m sure everyone will be excited about.  Also to all the kids out there that have requested stickers, I promise they are coming in September so just keep our eyes on the blog for details.  Oh and we will also be finally launching an online store to make it easier for people to get the products.

Do you have any last words, or thank yous to put out there?

A huge thank you to anyone who has ever supported Skitch, we don’t do this for any monetary gain, it is just because we love riding bikes and making stuff.  I would also like to thank the team and everyone involved with making Skitch happen on a day-to-day basis.  Also a huge thanks to you Torey for making this interview happen.  WRAHW is my new favorite blog!

Thanks for everything Tom. See ya soon.

Everyone, should keep watch for Tom's Skitch Clothing/WRAHW exclusive, mini web edit. It will arrive soon.