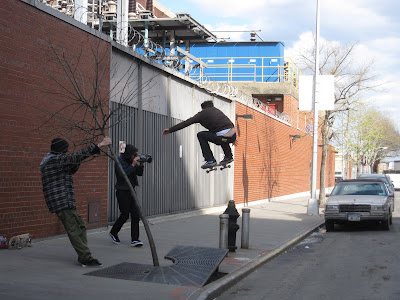 OK, so i found this image on a blog that i was viewing, and its a shot of this dude ripping this planter kicker.  If any of you remember that little edit that I made of myself riding in Alphabet City, the one that was shitted on by The Come Up (and even some of our own) , at the end I do a mini ledge roll to 180 off the curb.  Well, if you pay attention to this clip, the hydrant that this dude is hopping over is right up the sidewalk from where i filmed this.
My ending point is the fact that it is possible to set this little kicker up by propping something under the grate, and then launching out of it.  Wonka, I am directing this to you specifically, when I get back, we are going to look at this deal because even I want a piece of it!  Think about a 180 over the hydrant, thats banger clip status!!
Posted by WRAHW at 3:38 PM