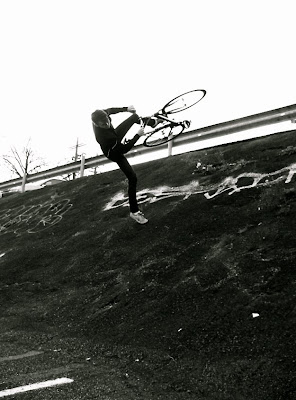 For all those out there who don’t know, what’s your name and how long have you been riding freestyle fixed?

Tyler Johnson and I got a track bike in Febuary of 08.

I think my style has a lot to do with my personality. I have skated a lot and was at one point pretty good at riding skateparks. I think that my "flow" comes from knowing how to use transition etc to speed you up. I try to just smoothly link tricks together.

I did race bmx at a young age, but never truly got into doing tricks and stuff. I started skating about the time I quit riding bikes. I think a lot of my comfort on a bike comes from racing. It's weird though because I am far better at riding a track bike doing tricks than I am at riding a bmx bike doing tricks. BMX is the shit though. I want to ride more of it.

Well the frame finally has cracked, but it lasted well over a year. I will embarrassingly admit that I have done a 5ft ledge drop on it and it was fine after. I am still riding it broken and its great. I think I just land a little softer than most people. Aluminum is not nearly as weak as people seem to think it is. I plan on always riding an aluminum frame and carbon fork, mainly because I love the look and geometry of new track bikes.

As for the term 700cmx I think it is ingenious. I also like the term fixed freestyle. It fits and makes sense.

Do you think that this “sport” has a decent future?

Your clips in the new Revival trailer are completely sick. I wasn’t that stoked on much else that was coming out at the time, until I saw that trailer. You are definitely bringing some newness to the scene. Have you been filming for your part recently, or are you pretty much finished?

Thanks. Wayne and I have filmed a ton of footage so far, but we are nowhere near being done. Both of us are taking this DVD seriously as a chance to kind of showcase what we can do. Him with film, me with my riding. Wayne is a great person and he has really helped me out through out this process, and it has been great getting to know him.

I believe he will be heading back down here to film the 31st of this month.

A lot of the tricks I have been doing recently are newly thought of at the spot, so some times it does take a while to land something. When that happens, I more so feel bad for making Wayne sit there and film crashes. As long as he doesn't mind, I will keep trying. I also like that he is down to film all types of riding not just tricks. We have the craziest mashing line on footage of my chain dropping at 40mph which was pretty crazy. It's fun he just lets me run with ideas I have and if they work out it's great.

I am currently going to school full time for fashion design. So that is a huge part of my life. I play the drums and piano as well, but I am not in a band or anything. I mainly just focus on school and work.

Who are those in which you usually shred with? 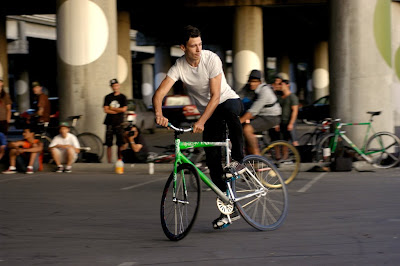 What other projects are you going to be involved with?

As many as possible. There are not to many other plans in the works right now, but if anyone is interested I am down.

When are you coming to NYC!?

Just kidding. Ummm I have no plans to head out there as of now, but I am sure one day I will end up there.

Yea finally getting some new parts on the bike. I am running 165 Profile race cranks with a 46 tooth Imperial chainring. I just got a new Alpina carbon track fork, which rules. I think I will finally be getting a new rear wheel later this month. Nothing special just another velocity to formula, but new is great!! I do still need to get a new saddle for riding though, the Kashimax doesn't cut it in the comfort department.

My setup has not changed much at all since I got the bike. Same wheels, stem, bars, frame, and grips. I have an obsession with YETI grips. They are made by ODI, and I used to run them when I raced BMX. They are the only grip I will run on my bike.

On that note, who are your current supporters, or sponsors? 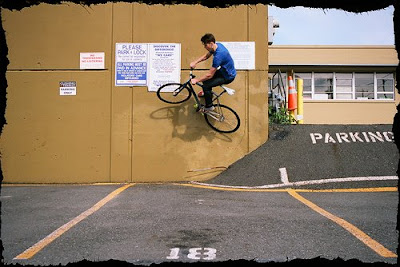 Thanks  a lot Tyler.