I don't know quite where I want to go with this topic, I have ideas but they are not organized...
I have been paying attention to/following Mtb Street sites, videos, blogs for a little over a year now, and slowly I became more and more interested in the aesthetic appeal of the bikes, and the overall closeness that the sport has to bmx, in a way.  A handful of fixed gear riders have starting to partake in building up 26" Mtb frames, as a pose to a traditional fixed frame.  I am pretty sure that part of the reason for this is due to visual appetite.
This is Toku's 26" Big Ben BMW fixed. 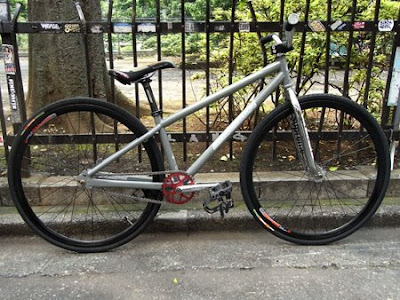 Photo by W-Base
These are minor facts though, things that don't really have a huge relevance to my point in being here with this post.
If you really think about it, Freestyle fixed shares pretty similar traits with Mtb Street in a lot of ways.  One of the main things that i think about is the fact that we bath run huge wheel bases which makes a lot of our tricks very similar in terms of what can and cant be done on certain things.
Wonka and I judged the Thrash Bike Street Coast Jam a phew months ago, and its a Mtb Street competition.  The night before the comp we went on a group ride through the city.  At first the riders were sort of confused as to why these two fixed gear kids were tagging along and such, but later that night the two of us made 15 or so new friends.  Once the kids saw that our sports were similar in ways, they began to understand us.  I remember Wonka doing a half cab bunny bar on the China Town banks, and everyone went wild!  From then on the became closer to us, conversing and and shredding along side us for the next two days.
I know that this is one of the reasons that I am down to support these dudes and what they do, because they may be unsure about  us weirdos, but they still admit to the fact that some of what we do is sick.  I have had two of my edits show up on one of the most popular Mtb Street sites out there thrashbike.com  Of course The Come Up has posted me up on their site too, but it was totally to shit on me, as a pose to truthfully commending our sport for having some sort juice to it.  BMX for some reason is usually just not as honest and accepting, but of course this isn't a sweeping generalization...
Many of you have seen this edit around.  It a recap of the Thrashbike Jam.  Wonka has the opening trick. 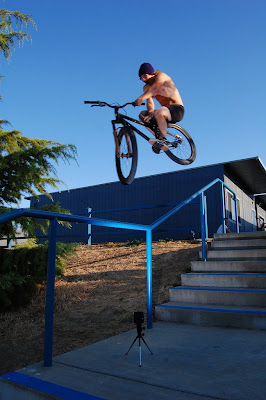 Toboggan of handrail
Photo by Don't Shave Your Twat 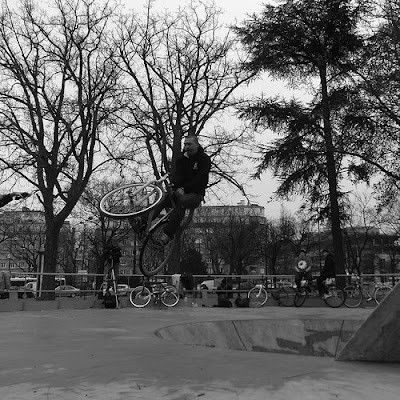 Super Ted's Toboggan
Photo by Fixed Gear London
Although, I am pretty stoked on the sport and how it is run, there are somethings that I ask myself.  After watching tons of web edits and such, ive noticed something, the majority of riders out there ride park, and If they ride street, they don't go as big as their bikes allow.  I still have not seen huge stair gaps or spins down stairs, and I am just on my toes waiting, sort of...  There are a phew kids out there that ive seen ripping things apart, hard, (i wont name drop) but alot kids just don't push it.  There seems to be alot of the same tricks over and over again, on the same objects.  This is another way in which our seed of a sport is similar to theirs.  In a lot of Freestyle fixed videos that I watch, people are doing pretty much the same things and not really seeming to push the sport, as a whole.  We are young in this whole thing, so of course people are still feeling around, but we should definitely try to stretch this thing as thin as it can go; myself included.
Posted by WRAHW at 6:21 PM