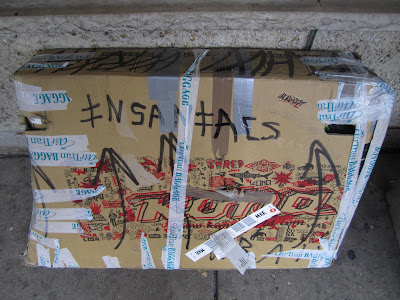 This box gave me the most trouble that I have ever had at an airport, ever. I missed two flights because I had to cut the box down with an allen key while hiding the fact that it was a bike, in the first place. 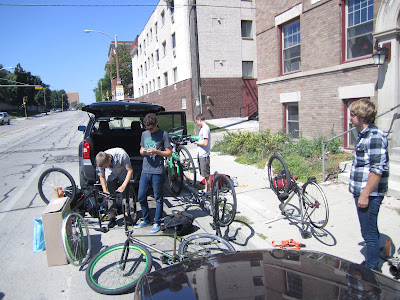 The clan piling up
I left New York having no idea that the Milwaukee dudes and I were going to head to Minneapolis and stay a few days after the All City comp and shred, so it was sort of surprising when they pulled that one on me. The crew consisted of Antonyo Wothe, Rick Anderson, Josh Baumgardner, Noah Bond, Joe Creer and myself. We packed the car up at around noon and stopped by Ben's Cycle to get parts and all that stuff settled for the trip. We hopped on the interstate and headed out towards Minneapolis, a trip that should have taken 6 hours but instead took 11. We stopped at a wild amount of places on the way. One dining spot that I recommend is Culvers. I had never heard of it before, but their chicken fingers were super sweet. There was this one fire works spot which pretty much was the whole reason for this weekend getting so gnarly. We all picked up at least $12 worth of fire works and saying as you could get a duplicate of everything for 99 cents, we all came out with an insane arsenal of explosives. 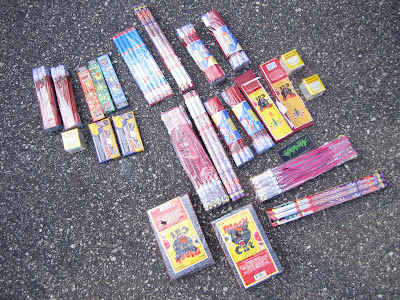 The bang gwap groupo.
We stopped at some weird skatepark in the middle of this camp ground with all of these log cabins. Antonyo used his slick communication skills to get us in for free. We played around there for an hour or so and dipped out because it was getting late. When we finally arrived at Sam's crib a lil outside Minneapolis, it was way late in the night. We unpacked our car and headed out. On the way to the city, Antonyo decided to shoot off roman candles out of the car window, at a stop light. We joked about a cop pulling up while we were at the red, and sure enough one did. He pulled slowly in front of the car as Antonyo had no idea (even after I tolled him twice, hahaaa). The cop made some odd gesture and pulled to the curb on the intersecting street. We sped off due to him not putting on his sirens. Yelling wildly, none of us knew how we got away from that one. We met up at Vinnies house and headed to this bank spot, running into Taylor Dwight and a handful of friends. We ended that seesion by shooting off tons of fire crackers and causing the campus police to come, or something. There was a gnar pizza session a Luc'e following these antics. Shit was wild good! The comp was the next day so around 3a.m, after shredding a lil more, we decided to head in for a lil sleep.
The next morning the gang woke up feeling like shit, as did I, but we headed out towards a long day of insanity. After getting some food inside us, we headed out to meet up with everyone at 1x1, 1 on 1, or some bike shop similar to those. On the way there while yelling at some bro dude from our car window we drove off and on foot Jakob Santos was running outside of my window, on the freeway off ramp! After hopping inside our already slam packed SUV during moving traffic, he proceeded to tell us that the Livery Design Group tour van was behind us and that he'd gotten stoked and decided to hop out and just chase us on foot. We rolled up to the shop and hung out for a lil bit, hugging brothas and getting stoked. Once the lil leg stretching and and fellowship was over we packed back in and headed to the skatepark. On the way there ,on the highway, we open up the fire works and had a full on roman candle battle with the LDG van, which housed Gus Molina, Matt Spencer, Jakob Santos, Sean Coats, and Ed Wonka. We shot lil fire crackers and black cats off before, but this was flat out insane. Again, I have no idea how we got away with this.
We pulled up to the skate park which resided under some bridge. Everyone signed in and started loosening up on the ramps. After warm ups, the comp started. The funny thing is that although crazy shit was going off the while time, there was little excitement or noise coming from the crowd, which was pretty annoying. I wasn't the only one who noticed this.
Here are a few things that totally blew my mind while viewing the comp. Matt Spencer's gap wreckage that was probably one of the gnarliest falls in fixed gear, Josh Boothby's truck driver landed first try, and last but not least, at all, Antonyo's clean ass duster grinds on the flat rail going across the box. There was tons of other stupidity being throw around that caught my attention, but these were the soul steelers. Jakob got first, Boothby got second, Ed got third.
The next day we all were super tired, well, everyone except me because im the loser who didnt compete. Everyone met up to ride street and to head to the Sex World to look at black dildos and studded dicks. While we were heading to a spot, Jakob and Boothby decided to shoot off roman candles in heavy traffic. Jacob and i rode right past a cop as balls of fire were flying out of his bike, as it seemed. The cop didn't do anything... We rode at this one parking garage spot and everyone went nuts. After meeting up with my MKE boys later (they went to search for green lazers) we headed back to this spot and Antonyo did the sickest tire slide in fixed gear. You will see the clip later, but believe me. It ruled. The night ended with a dangerous fire work fight in the garage involving Antonyo, and Jakob. This shit was wild! The Cops came, and we ran. That was a good night. After a few more days of riding and targeting innocent people with fire works, we headed back to Milwaukee.
When we got back to Milwaukee everyone reunited with girly friends and family and then we went out riding. I don't even remember how long I was in MKE but I enjoyed it for sure. We did more blowing up and wilding out than riding, but we still got on the bikes every day. There were two nights in a row when we set off sparkler bombs the size of grenades. The cops and fire department came one night. Antonyo got wrecked over and over again while filming for the WRAHW video, even after saying that he would take it easy the next day. This dude has some of the most fluid riding in this whole shit. Thanks to everyone who rode, fucked shit up, got wrecked, filmed, and went all out. Everything blurs a lil, but this trip was absurd, in a good way. 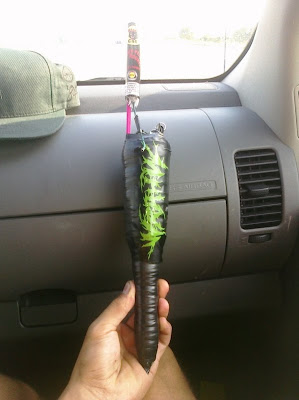 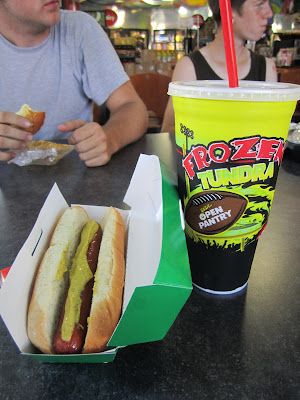 In Milwaukee we went to this place called Open Pantry pretty much every night. Their design on this cup is awesome. 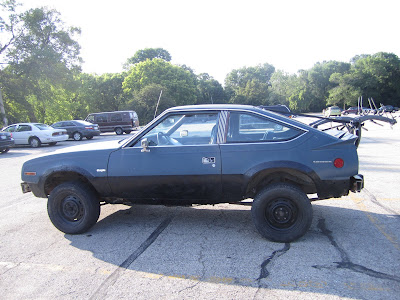 This car was wild 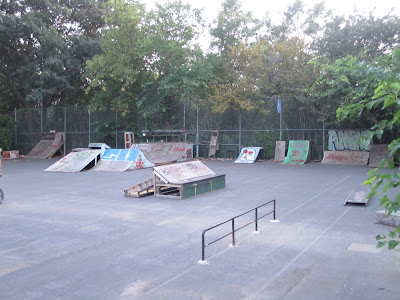 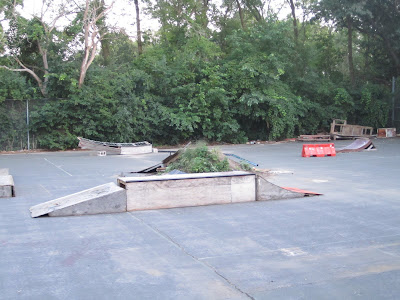 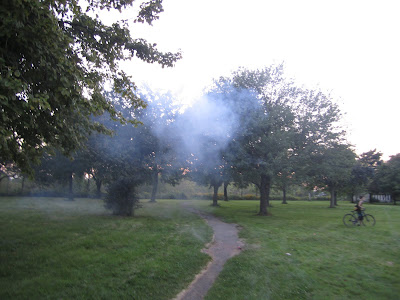 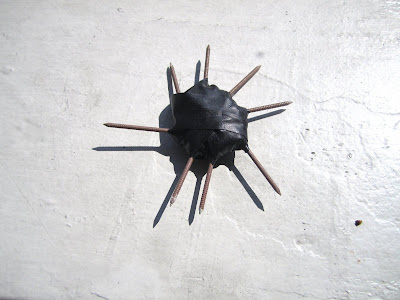 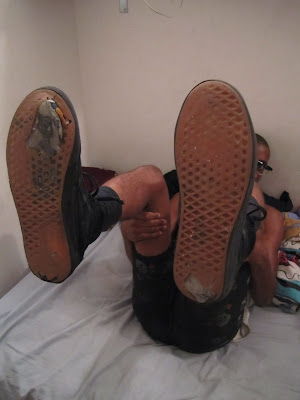 When i got back home my shoes were done in
In the end, Minneapolis cops are way more lax than a lot of cops. The Cali dudes always add more insanity to a situation, especially Jakob. Fuck silent ass comp viewers that most likely don't give a fuck about freestyle fixed gear. Milwaukee has some of the sickest spots that I have ever ridden. Homemade bombs rule. Stay wrecked.
Posted by WRAHW at 8:33 PM