Peel Sessions with the Revival

Peel Sessions with the Revival from John Prolly on Vimeo.

Peel Sessions with the Revival AKA the best Peel known to man! I had so much fun that night, even though i got a little fucked up. John sent me a heads up about this joint, and i really like it. Its very fast and straight to the point. This is what John had to say about the edit:
Back on August 27th this year, the Revival crew was in town filming Torey, Wonka, Jeremiah and me. The guys rolled through Peel Sessions and hung out with the regulars. I figured it'd be a big turnout so we made a ghetto wedge out of some pallets and plywood. Everyone was hitting it and a bunch of BMXrs came out to ride, blasting 360s and 180s off it.

One of those dudes, Scott Marceau was there shooting with a Flip Cam. He caught a few good beefs and some other general goodness. I compiled a short little edit of some of the clips. It's nothing too serious, but the falls are too good to not post. The Revival bonus disk will have some extra footage as well, so be on the look out when the DVD drops.

Music provided by Fukpig "As the Bombs Fall" off the album Spewings from a Selfish Nation. 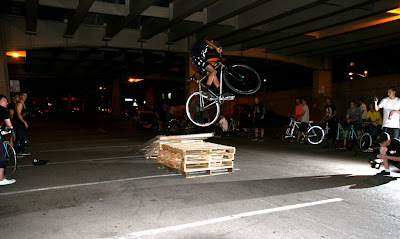 This is the 180 that was attempted at the beginning, shot by Wilis Johnson.